At the edge of survival

About 35 years ago griffon vultures were at the edge of its survival in Bulgaria. They were an endangered species in the country. At that time their population was less than 10 pairs. In 2020 a total of 106 pairs of griffon vultures were recorded along the valley of Arda River in the Eastern Rhodope Mountains.

Griffon vultures are enormous. Their wingspan can reach up to 2.7 m; they have a long neck (the neck seems bare but is actually covered with short tiny feathers), a ruff of feathers and a powerful beak. Their wings are broad, with distinctive ‘fingers’ (the primary flight feathers at the tip of the wing). Their young reach maturity in their fourth or fifth year; then the colour of their beak changes from dark to light yellow, and their dark brown ruff gradually turns whitish. 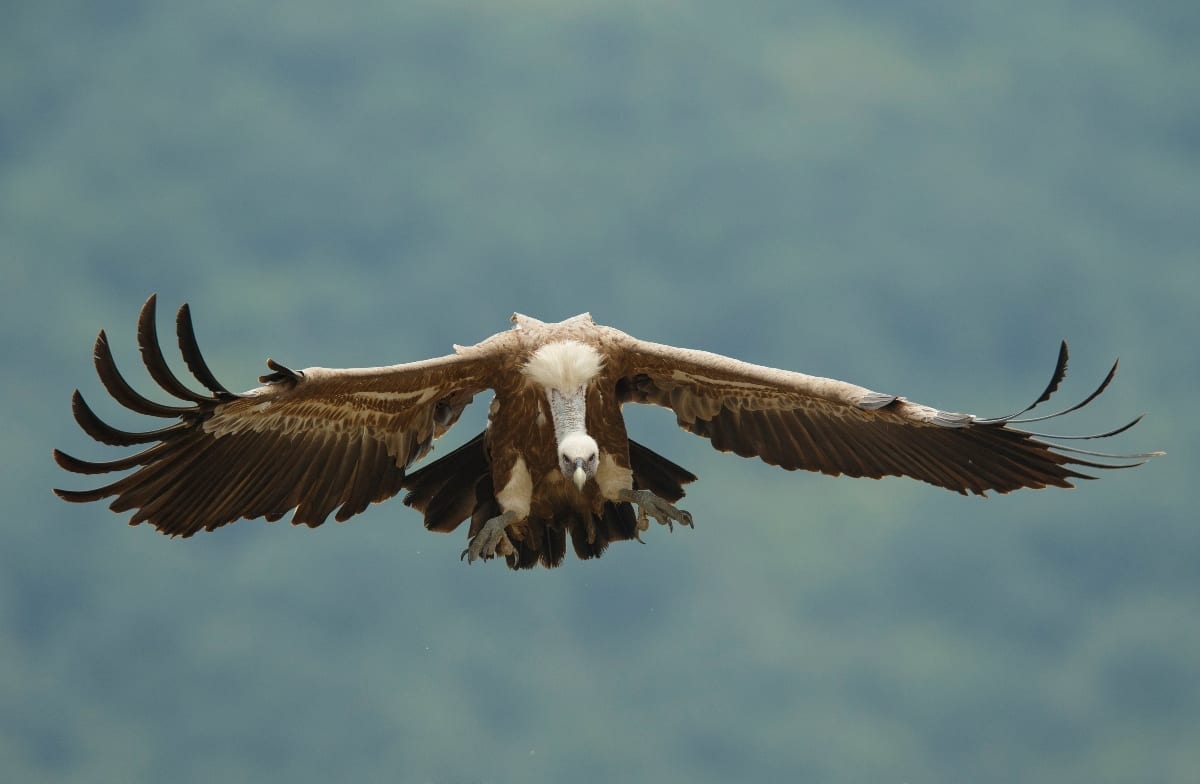 Despite being a resident species, griffon vultures do wander. Young vultures can cover great distances, flying to Israel, Saudi Arabia and even Africa but they could also spend the winter close to their breeding grounds. Vultures travel mostly by soaring and gliding, using the warm thermals to gather height, soaring up to more than 3000 metres. Wandering and migrating birds fly through territories with numerous threats. Being far from their colony and from older, more experienced birds exposes young birds to a greater risk in their first few years.

Griffon vultures prefer wide open spaces – be it up in the mountains or in semi-desert areas, from the sea level up to 3000 m above it. In Bulgaria they are found in cliff habitats, overlooking bare slopes and ridges. Vultures nest and rest on vertical cliffs with many niches, ledges, pinnacles, often along big river valleys or reservoirs. There they can rest undisturbed after having flown for hours high up in the air over their territory with just a few wing beats.

Vultures use the columns of warm air (‘thermals’) that rise from the warmed-up surface of the ground, allowing these big birds to soar up without flying actively, thus saving energy. Thus they can survive without food for nearly a month. They search for food over open areas with a high density of domestic and wild herbivores. 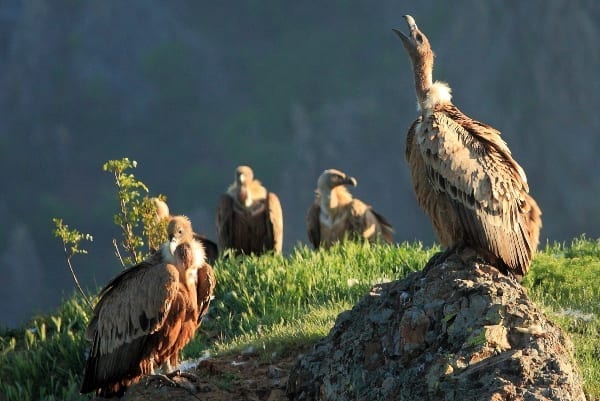 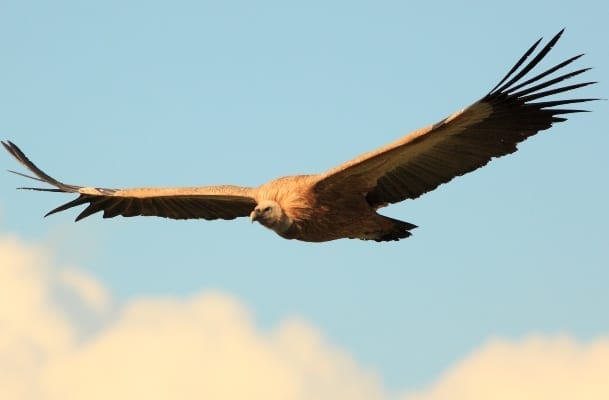 Strong sight and a ‘bare’ neck: the griffons’ secret

Griffon vultures feed on the carcasses of large mammals, eating their softer parts, the muscles and the organs. Their long, ‘bare’ neck helps them reach the insides of a carcass easily, and it is easy to clean after feeding; they find food mostly by sight – their sharp eyes can spot a carcass from kilometres away.

Griffon vultures are far more social than the other species of vulture in Europe. They look for food in groups and breed in colonies on remote cliffs. They build their nest in cliff niches, ledges or platforms, sometimes without cover on top. The nest itself is built with twigs, with a bedding of dry grass, moss and fur.

The pairs begin their breeding displays in mid-November and they prepare the nest in December–January. The female lays a single egg between January and March, depending on the weather conditions. She incubates it for 52–57 days. The young remains in the nest for 4 months under the tireless care of its parents. After leaving the nest the young vultures wander together with the other vultures from the colony for a few months before setting off to far-away lands. 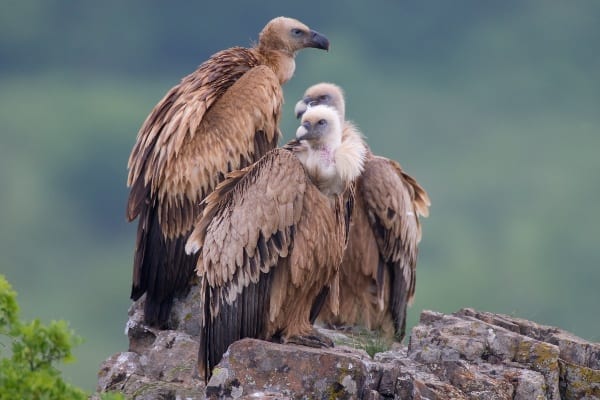 Griffon vultures feed exclusively on the carcasses of domestic and wild herbivores. In the past huge herds of sheep, cattle and goats roamed free around villages; when an animal died, its carcass was quickly disposed of by nature’s cleaners – the vultures. Further back in time the numbers of wild herbivores in Bulgaria were high too. In recent decades the numbers both of wild animals, as well as of extensively bred livestock in Bulgaria have decreased rapidly. Inevitably, this has led to less food resources for the vultures too.

After Bulgaria joined the EU, new measures for the disposal of dead domestic animals were put in action – they must be transported to specialized incinerators. The autochthonous breeds of cattle in the Eastern Rhodope Mountains, however, graze on the sunny slopes of the mountain almost all year round, providing a source of food for the vultures. But during the coldest months of the year and when the vultures start raising their young, they need additional supplements of safe food.

The network of supplementary feeding sites plays an important role in these harsh moments. Local farmers give up their dead animals to the BSPB for free to be transported to a feeding site. The sites are located on suitable spots close to the breeding colonies of the species; locations that are far from human disturbance and allow for safe landing and roosting. The sites are protected with a high fence and an electric fence to ward off carnivores so the vultures can feed in peace. This approach of providing food for the vultures reduces the risk of poisoning and ingesting antibiotics through their food. The supplementary feeding during the breeding season increases the nesting success of the pairs and creates better chances for survival for the young, unexperienced birds. 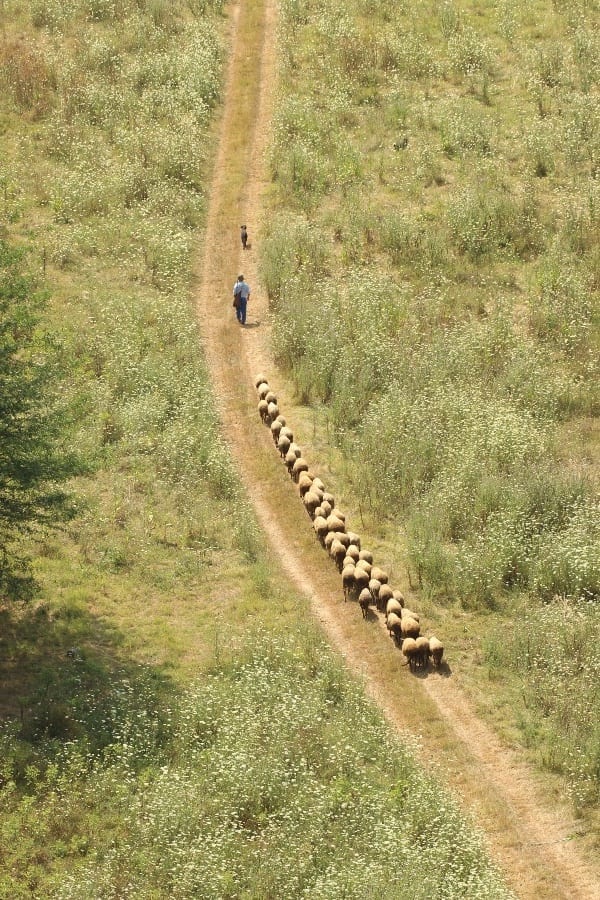 The only team with a specialized dog trained to find poisoned dead animals and baits in Bulgaria is the BSPB’s own anti-poison team. The team started operating in 2016 chiefly in the area of the Eastern Rhodope Mountains and Sakar Mountain but it responds to situations across the country. The task of Bars and his handler Nikolay is to search for carcasses of poisoned animals and for poisoned baits, thus assisting the institutions responsible for collecting evidence and ensuring that the dangerous substances are removed from the wild quickly and safely. After finding a carcass the handler determines what steps to take, as the animal could have died from natural causes. In case it has been poisoned, it must be removed from the wild as soon as possible; samples are sent to a laboratory to establish the cause of death. The use of poisons is illegal; it can have a tragic impact on vultures and other wildlife, on the ecosystem as a whole and on humans too.

Strategy in the fight against poisons

Today the use of poison and poisoned baits is strictly prohibited but we are still witnesses to vultures and other animals dying from poisoning. Poison is among the most horrible measures against predators (in Bulgaria chiefly wolves and jackals), and it destroys vultures and other rare and protected species of animals.

To combat this crime against wildlife the BSPB participated in the development of a National Strategy against Poisons. The Strategy is a scientifically based, legally consistent system of management for the operation, regulation, interaction and responsiveness of the main state institutions, non-governmental organizations and other stakeholders, aimed at the prevention of the negative impacts of poisons on biodiversity.

Dangerous power pylons are just one of the many threats that vultures and other rare birds face on a daily basis. Upon perching on risky power pylons or at take-off the birds can touch the lines and be electrocuted. In order to reduce the risk we established partnerships with electric providers in Bulgaria for the insulation of potentially dangerous pylons. The insulation devices are made of special plastic and are installed on the lines close to the pylon, thus eliminating the risk of a bird touching the bare line and getting electrocuted. The length of the insulation device conforms with the size of large birds of prey such as the vultures.

In certain conditions, such as low visibility due to fog or heavy wind, vultures can collide with power lines on ridges or anywhere where they fly low or start gathering height. Unfortunately, vultures and other birds are not always able to see the power lines in front of them and collision may follow. To avoid that, special devices are used – the so-called ‘diverters’. Diverters are reflective plastic elements that are installed along the length of the power lines. As they rotate, they reflect sunlight, thus signaling the birds of the obstacle in their way.

In order for our living planet to function properly, all its components should be in good order. Every organism has its place in natural processes and its extinction can cause irreparable damage on the ecosystems. The carcasses of dead animals can be a source of diseases, so nature has found ways to self-regulate. There are many species that play the role of cleaners but vultures are undoubtedly the most efficient and adapted for the task. 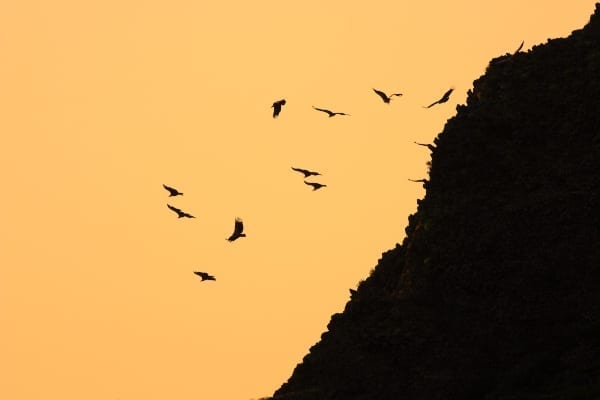 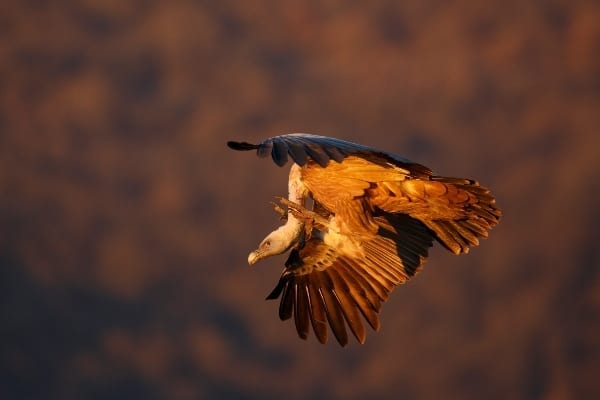 Their sharp sight, the joint effort to find food, their wide wings and the masterful flying skills that allow them to cover hundreds of kilometres daily in search of food all combine to make vultures nature’s best adapted cleaners. They quickly dispose of animal carcasses and prevent the spread of diseases. Their highly acidic stomachs destroy all the bacteria and the other microorganisms in their food.

In contrast to people’s expectations vultures are clean, tidy birds that preen and clean their plumage for hours every day. The four species of vultures that live in Europe have adapted to feeding with particular parts of the dead animals; thus they avoid competition and are effective as cleaners – and on top of it they do their job for free!

Human disturbance in the vultures’ distribution area is another serious threat for them. Even remote wild corners become more accessible for humans every day; the continuous disturbance for the birds impacts their breeding success and the survival of their young. When humans show up in the vicinity of vulture nests, they can scare the adults away and make them leave the egg in the nest exposed, or the chick – unattended. As the chick depends strongly on its parents, it would most probably die on such occasions.
Extreme sports such as rock climbing, paragliding, off-road driving, etc. can cause vultures and other rare species of birds to abandon their nest. In Bulgaria there are many sites to do such sports, whereas the sites suited for vulture nesting become rarer every day.

Therefore, for many years the BSPB has championed the establishment of protected areas at sites with identified nesting colonies of griffon vultures, or in the breeding grounds of other species of birds. Most often those have been established and regulated as ‘protected sites ’ or ‘nature monuments’. Almost all protected areas in the Eastern Rhodope Mountains fall into one of these two categories, and they have been established following a proposal by the BSPB.

Modern technology enables us to observe the life of birds ever more intimately, even with the most secretive among them. In recent years GPS transmitters proved to be an irreplaceable research and conservation tool for vultures and other species of animals. They provide us with an opportunity to follow the animals’ movements and to explore every moment of their lives.

GPS transmitters are small, solar-powered devices that record precise GPS coordinates and send them to a receiving device via satellite or through the mobile network. Thus the location of every tagged individual can be tracked in real time.

So far, dozens of griffon vultures have been tagged with GPS transmitters and we track their movements daily. Tracking reveals a lot about their lives, their feeding sites, the main migration routes they use, their wintering grounds and the areas that pose the most serious threats to them. We are able to plan our conservation efforts and actions accordingly and achieve the best and most effective results for the preservation of this natural treasure. Thanks to the GPS technology, we are able to identify the most dangerous power lines and to put insulation on them, we determine the areas where human disturbance should be controlled strictly, as well as the areas where the risk of poisoning is the highest. In case of poisoning we can respond quickly and discover the location of the poisoned bait immediately, thus saving the lives of many vultures and other wild animals.