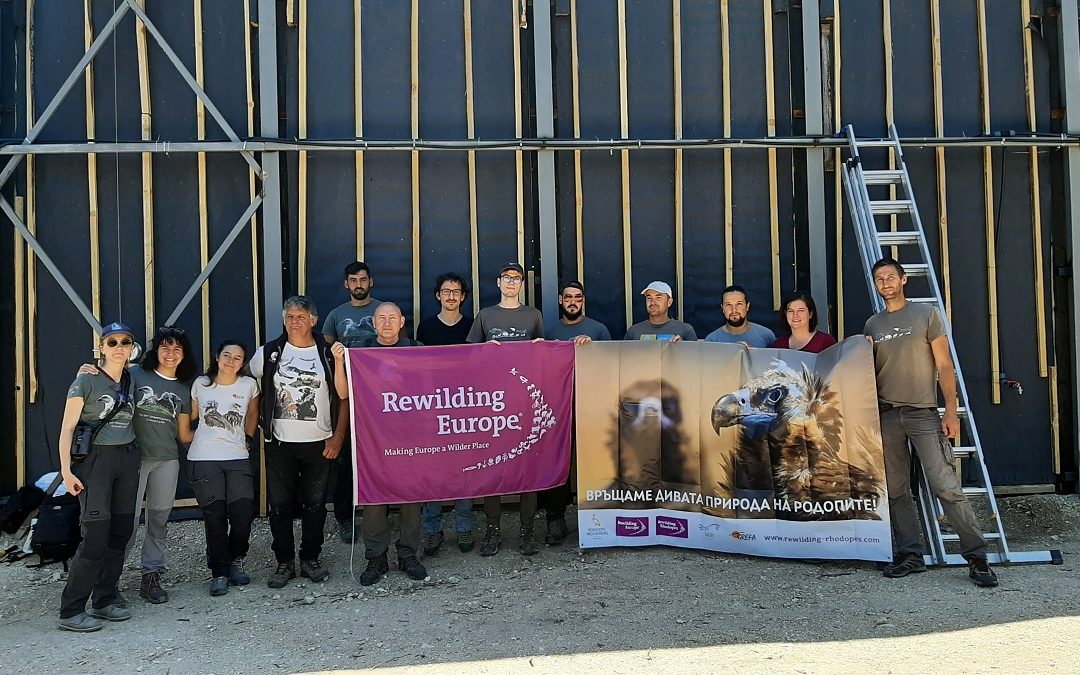 Cinereous vultures – Europe’s largest and heaviest raptor – have been brought back to Southern Bulgaria, with 17 birds from Spain having been transported all the way to the rewilding landscape of the Rhodope Mountains.

The vultures are being temporarily housed in a large, purpose-built aviary until they can finally be released back into the wild this autumn when it is hoped they will re-establish themselves as a keystone species within this ecosystem. Their return promises to restore a vital part of the circle of life and strengthens hopes that these giant vultures may one day spread their wings across the breadth of Europe once more. 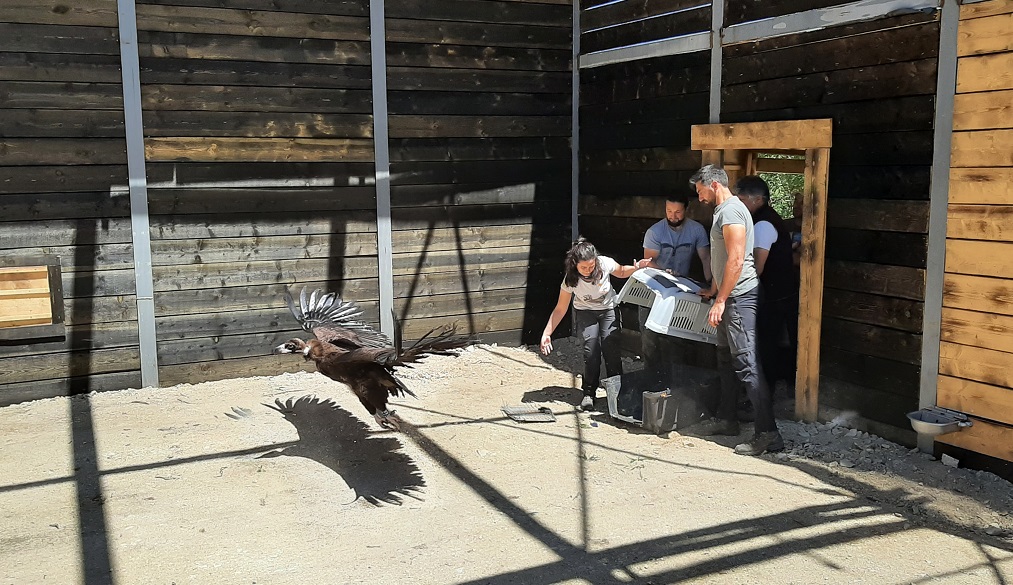 “This is our dream actually,” says Dobromir Dobrev, Project Coordinator for BSPB/Birdlife Bulgaria, a key partner of Rewilding Rhodopes. “With the natural restoration of the former breeding sites, mainly in the Balkans, these birds can be easily connected with the Alpine region and then the Iberian Peninsula. A good example is the griffon vulture. They are already making these connections.”

Cinereous vultures, also known as Eurasian black vultures, once ranged from Portugal all the way across Europe, through Turkey to the high mountains of Kazakhstan and the Mongolian steppe. However, like many vulture species, cinereous vultures have seen their historical range shrink and fragment as their numbers have plummeted, with populations subject to a combination of threats including poisoning, habitat loss, reductions in the availability of carrion, and collisions with powerlines.

Today, the European cinereous vulture population is split in two, divided between a population cut off in the west and another remnant population isolated in the Balkans. “The map we see now has a lot of holes,” explains Deli Saavedra, Head of Landscapes at Rewilding Europe. “In the lowest period, there were 200 pairs in Spain. All the other European populations, with the exception of a small colony in Greece with around 25-30 pairs, were extinct.”

From this historic low point in the 1970s, the cinereous vultures have been staging a gradual recovery, aided by intensive conservation efforts. Spain now supports more than 2500 breeding pairs, and this population has become the source for successful reintroductions in the Pyrenees, the Cevennes, and the French Alps. In 2018, cinereous vultures were reintroduced to Bulgaria’s Balkan Mountains and now, 9 males and 8 females have been transported from Spain to Bulgaria’s Rhodope Mountains, increasing the chance that in the future the separate populations might join up again, filling in the holes in the map. 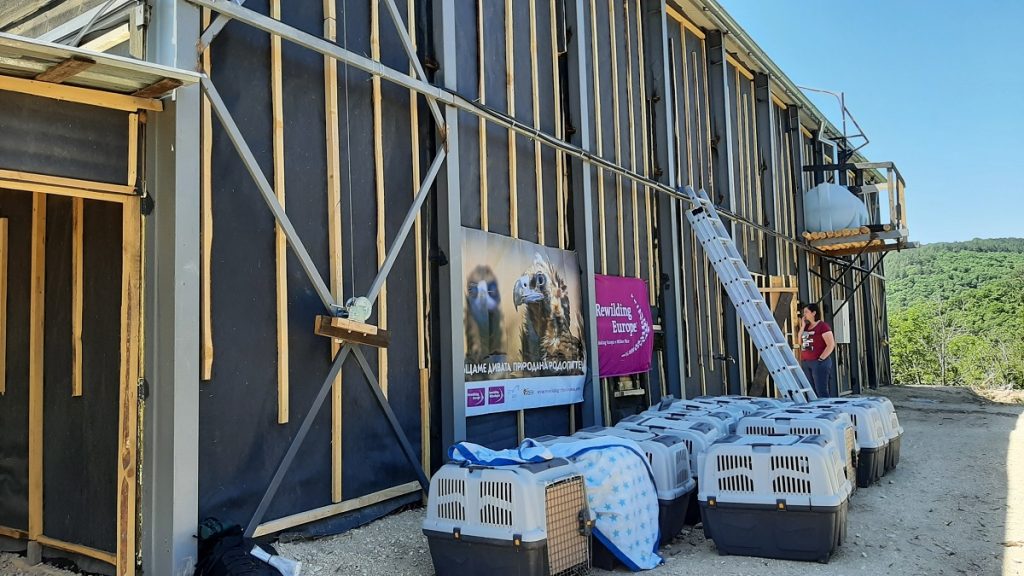 The Rhodope Mountains offer some of the best habitats in Europe for birds of prey, supporting an incredible diversity of raptor species. However, before the reintroduction of cinereous vultures could be contemplated, it was necessary to assess why these large vultures had disappeared in the first place, to ensure any reintroduced individuals wouldn’t suffer the same fate.

To counter this threat, a European Community LIFE programme (LIFE Vultures) was initiated in 2016, working to encourage the transition away from toxic lead ammunition to safe non-lead alternatives. The rewilding team also worked with local partners to identify and mitigate other causes of vulture mortality, gradually improving the local availability of carrion with the re-establishment of large native mammal populations and reducing the risk of fatal collisions by marking power lines. At the same time, efforts have been made to both educate the local populace about the dangers of poison and to step up law enforcement. Poison-detection dogs now patrol the mountains and police and prosecutors have received training related to its illegal use. The programme has been a success and today, the Rhodope Mountains are ready for the return of their largest bird of prey. 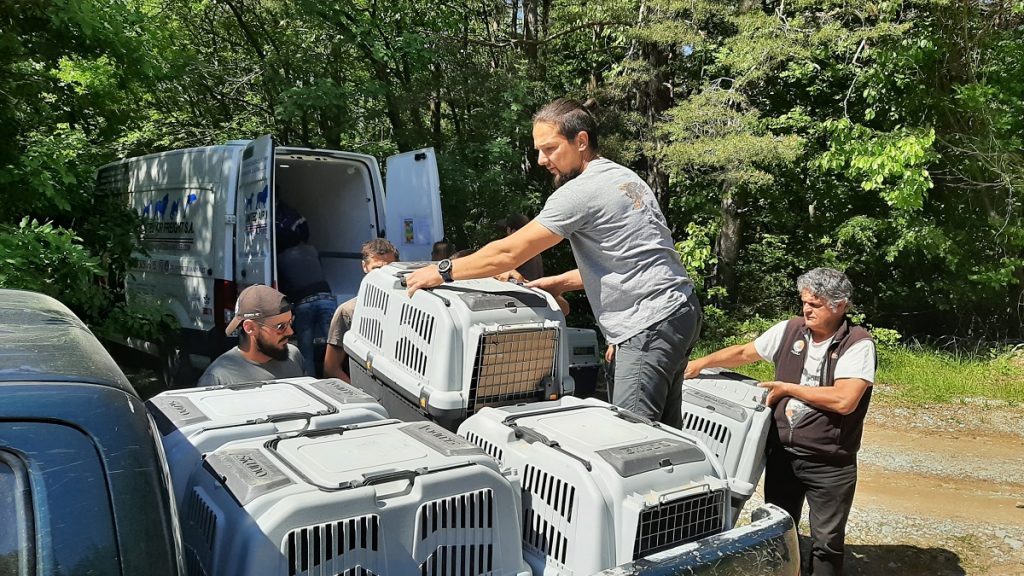 With all the groundwork done and a release site identified, it was time to bring the first birds from Spain, where Spanish NGO GREFA coordinates the rescue and rehabilitation of injured wildlife. GREFA were able to supply 17 cinereous vultures, 4 of which were captive-bred, with the remaining 13 being wild birds that had been rehabilitated after injury. Their 3300km journey took 3 days to complete, with the birds carefully transported in individual carrier boxes, traveling firstly by van across Europe and then, for the final leg of their journey, being carried in the back of a pick-up truck to a secret location in a remote corner of the Rhodope Mountains.

“We hope that the work between the organizations that promote this project, and the long journey of these Spanish black vultures, will become an inspiring example of the recovery of biodiversity through international cooperation,” commented Ernesto Álvarez, GREFA’s President. 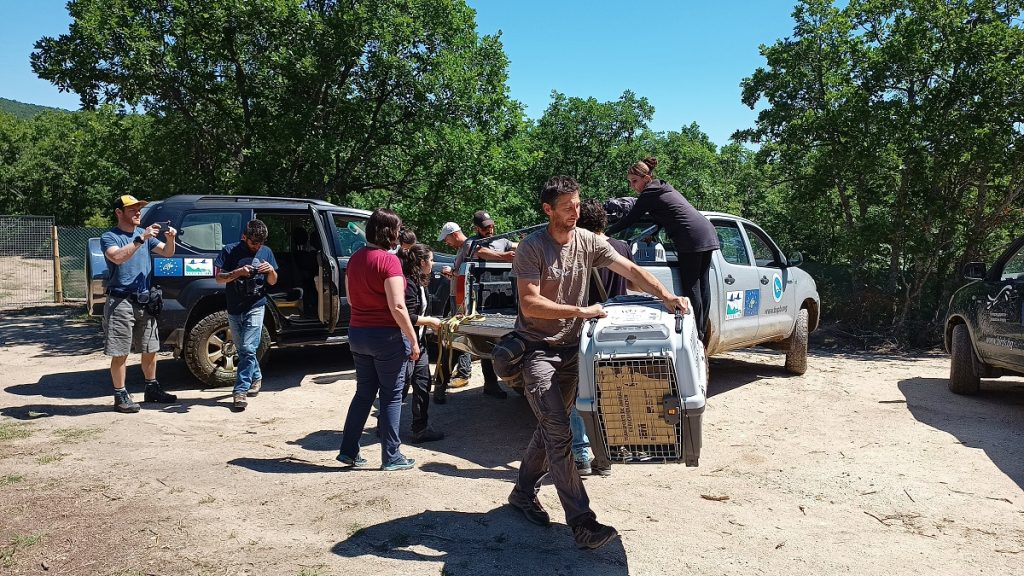 After their long journey, concerns remained that the disturbance-sensitive birds might disperse to areas where threats still persist. There was even a worry that if the birds were released too soon, they would immediately fly back to Spain. To reduce this risk, the vultures will be kept in a purpose-built aviary for the first few months, the construction of which was funded with a grant from LUSH. Here they will have time to familiarise themselves with their new home, while being provided with a reliable source of food, including hares, wild ungulates, sheep and goats – exactly what they are likely to find for themselves once released. Throughout this time, the birds will be monitored by web cams and human contact carefully avoided.

The Rhodope aviary is located on a ridge with clear views of the surrounding forest where artificial nests have been erected on top of oak and pine trees within sight of the aviary. Cinereous vultures nest in loose colonies, sometimes on cliffs, but more often on tree tops, and these artificial nests have been erected to replicate a natural colony so as to further encourage the birds to remain in the area. They are huge structures, each the size of a double bed, piled high with branches, leaves, moss, and grasses, with a final decorative splash of white paint added to look like vulture droppings. 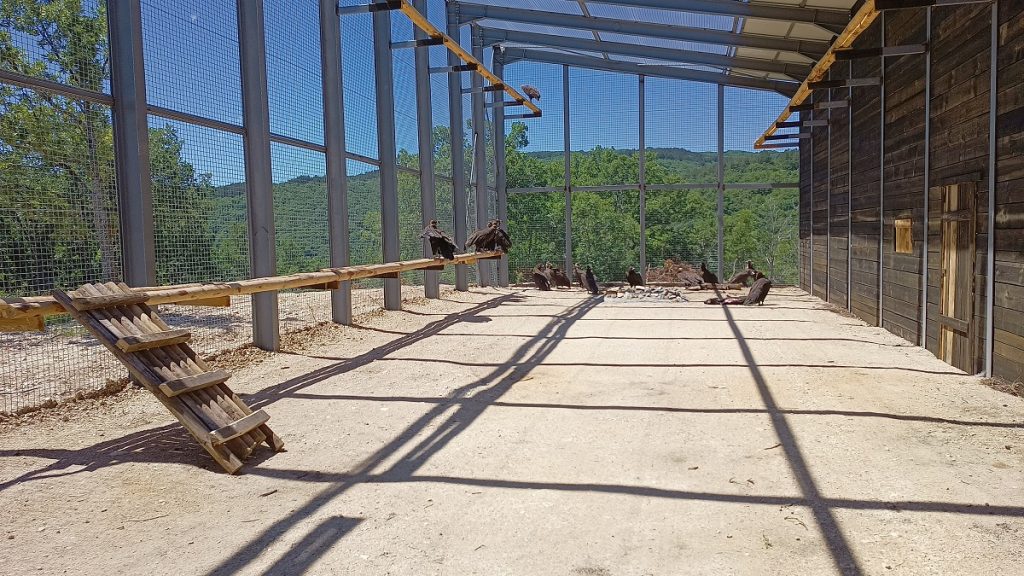 If the newly arrived cinereous vultures have already taken note of these nearby nests, they may also have cast their keen gaze upwards, where they will likely have observed golden eagles, peregrine falcons, and griffon vultures crisscrossing the busy skies. The griffons fill a different scavenger niche in the mountains, specializing in finding and eating larger carcasses, whereas cinereous vultures typically search for food at lower altitudes, and over the more wooded country, targeting a wider range of food sources, including smaller mammals. Cinereous vultures may even take small live prey, filling a similar niche to Africa’s white-headed vulture. More importantly, the cinereous vultures are serving as an umbrella species, with all the efforts made to reduce threats and gain support from local stakeholders ahead of their reintroduction also benefiting resident species like golden eagles and griffon vultures.

Cinereous vultures only start to breed once they reach 5 or 6 years of age, after which they lay one egg a year. Breeding success is high, provided they remain undisturbed, but the individuals that will be released into the Rhodope Mountains this autumn will still need reinforcements, with the hope being that 6-10 further individuals may be added every year for the next ten years, as part of an ongoing programme of releases. As the colony grows, the Bulgarian birds are expected to mingle with the small number of cinereous vultures surviving in the Greek part of the Rhodope range. And after that, the sky is the limit!

“If we are lucky, we will have birds that will join up with breeding populations in Turkey and also Western Europe,” says Dobromir. “The larger the population the higher the chance that these connections will be revived again. This is our hope.”