About | Nest | Migration | Threats and activity

The Egyptian vulture – a sacred bird with the profile of a Native American, is the smallest of all four European vultures, and the only one that migrates. With a wingspan of just 180 cm and body length of 60–70 cm, it is also known as “lesser vulture” in Bulgarian. Adults have white plumage with black flight feathers, and a bare-skin yellow face; young birds have brown plumage and the skin on their face is blue. The crest of projecting pointed feathers on the Egyptian vulture’s head give it its typical, memorable appearance. 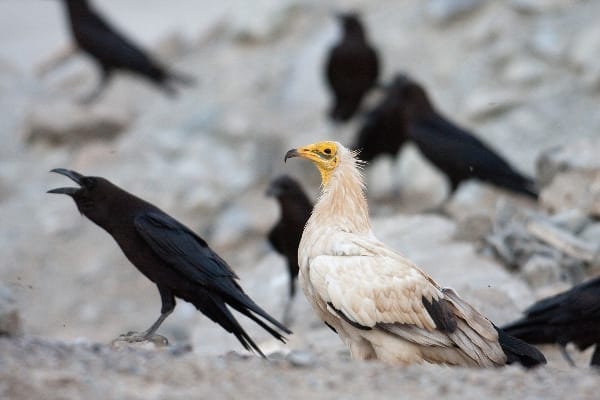 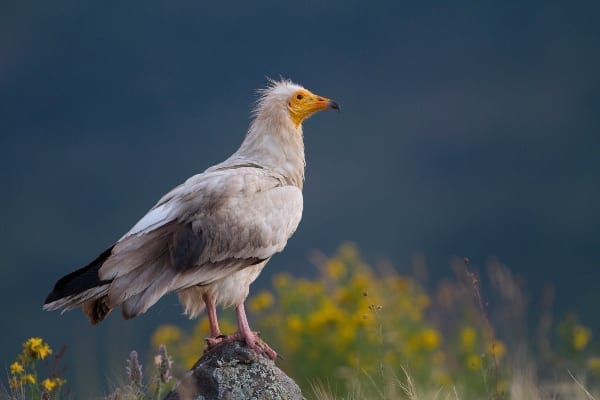 From Ancient Egypt to the Eastern Rhodope Mountains

The Egyptian vulture lives in the immediate vicinity of man since ancient times. It features in many tales and legends, and many civilizations held it sacred. The Ancient Egyptians regarded it as sacred and used its image as a hieroglyph. It was considered a symbol of the goddess of fertility, motherhood and magic – Isis.

Elderly Muslims from the villages in the Eastern Rhodope Mountains still remember the legend of ak baba, ‘the white father’, that saved Muhammad from the talons of the golden eagle. To express his gratitude, the Prophet gifted the bird with eternal life and white plumage that symbolizes chastity and bravery. Thus the ‘white wise man’ found a nest in the hearts of many peoples in different parts of the world.

The Egyptian vulture up close

Today, the Egyptian vulture is a globally endangered species; the decline of its population makes it one of the fastest vanishing birds on the planet. In the past the Egyptian vulture was widely distributed across Bulgaria, and nested even on the hills in the city of Plovdiv. Today, however, less than 60 pairs remain on the entire Balkan Peninsula. The species’ strongholds here include the Eastern Rhodope Mountains (Bulgaria and Greece) and the territory of the Republic of North Macedonia; it can be seen in North-Eastern Bulgaria, South Albania and Western Greece too.

Egyptian vultures prefer hills and lower mountain ranges. They nest mainly on cliffs, often in the vicinity of human settlements. The nest is situated on ledges, in niches and in crevices on the cliff face. It can be used for years, even decades.

In April the female lays 1–2 eggs. Both parents take part in the incubation, and after the chicks hatch, they share the parental responsibilities too. True to all vultures’ reputation as ‘nature’s cleaners’, Egyptian vultures feed mainly on carrion. However, their diet includes also insects, larvae, amphibians, lizards and tortoises that it catches alive.

Egyptian vultures are known for their intelligence. They are among the few birds worldwide that use tools. In Africa they have been observed many times as they use rocks to crack open abandoned ostrich eggs that are also a part of their diet there. 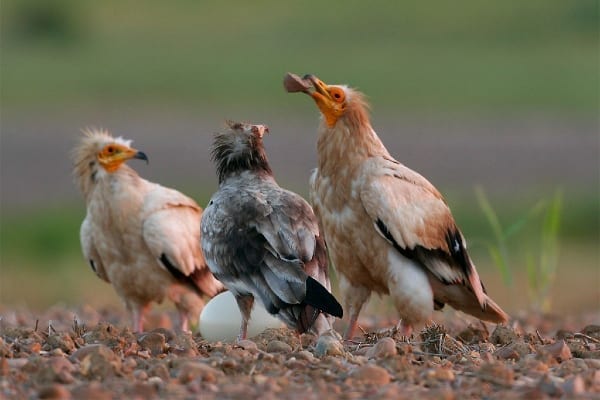 Egyptian vultures are typical long-distance migrants. In September young and adult birds leave their summer territories and set off on a long journey towards their wintering grounds in Africa. They migrate in small groups, mainly above land, avoiding too big expanses of open sea. They fly over Turkey, following the eastern coast of the Mediterranean, and they enter Africa. Large gatherings of Egyptian vultures are observed at locations with abundant food resources along the migration route, such as refuse dumpsites and supplementary feeding sites. The migration of the birds from the Balkans is the hardest as they need to cover over 5000 km to their wintering grounds, passing through a series of important migration hotspots, or the so-called migration bottlenecks. Hundreds of thousands of migrant birds pass through these hotspots on their way between Europe, Asia and Africa. The first autumn migration is among the most serious challenges for the young, unexperienced birds; sometimes they need more than 50 days to reach their wintering grounds, while the adults can cover the same distance in just 14 days.

In autumn, the long migration of the Egyptian vultures ends in Africa. They spend there the winter months when the weather conditions in Bulgaria are too harsh; they start preparing for the way back in early spring. In Africa, Egyptian vultures are surprisingly trustful to people and they often feed in the villages and towns. The birds roost in groups on rocks, cliffs and electricity pylons.

The Egyptian vultures from the Balkan Peninsula winter across the entirety of the Sahel zone in Africa – from Niger and Nigeria to Ethiopia. Young Egyptians usually spend the first years of their lives in Africa, where they wander around looking for food. They return to their ‘native’ lands at 2–3 years of age. Due to this behaviour and the long migration Egyptian vultures actually spend half of their life away from their breeding grounds. 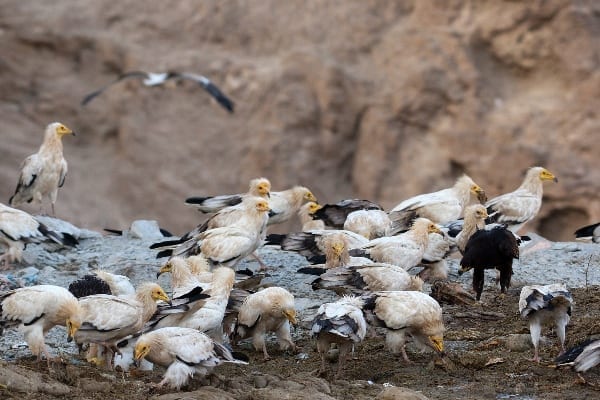 The use of poisons and poisoned baits is still one of the major threats for Egyptian vultures and other birds of prey on the Balkans. As a result of the use of poisons in Bulgaria in the period 1960–1980, the populations of birds of prey were almost completely destroyed. Most often people turn to the illegal use of poisons to solve human-predator or human-human conflicts, following material losses. Unfortunately, due to their scavenger nature, vultures fall as collateral victims to this vile practice. Therefore in many European states, including in several states on the Balkan Peninsula, strategies to fight the use of poisons have been developed. Even though Bulgaria is one of the countries with highest biodiversity in Europe, it is still an exception in this respect: such an operational strategic instrument does not exist here yet. This prompted the BSPB to initiate the process of planning a strategy on the national level. 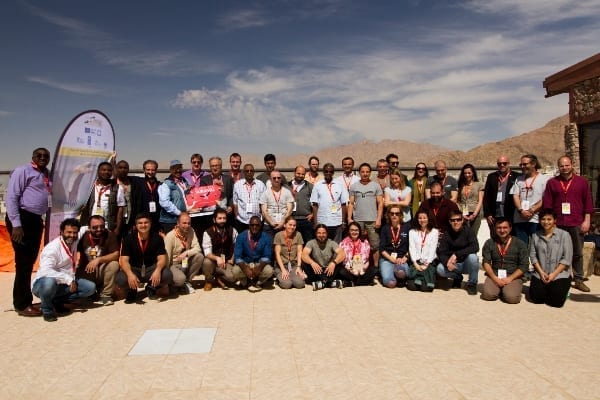 Strengthening the Balkan population of the Egyptian vulture

The negative population trend of the Egyptian vulture, together with the unabated threats to the species, such as the use of poisoned baits, illegal killing, electrocution and wind-turbine collisions, makes it harder and harder for Egyptian vultures to survive. Therefore, we aim to strengthen the Balkan population of the Egyptian vulture via alternative methods: raising birds in captivity and releasing them in the wild in the hope that they will form pairs and will start to breed successfully. This restocking programme is implemented in the Eastern Rhodope Mountains, and three different methodologies are tested: hacking, fostering and delayed release. The programme is realized in partnership with the Green Balkans NGO and several European zoos. 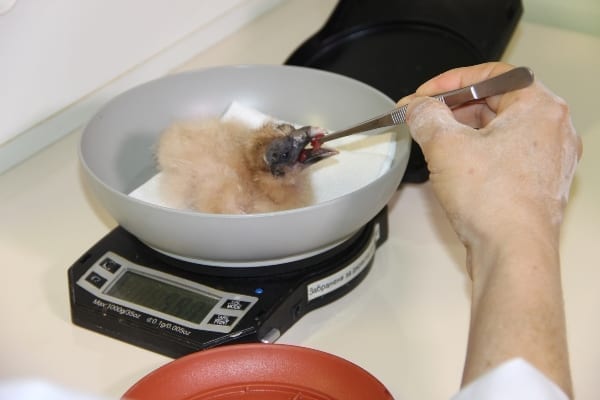 Egyptian vultures often use electricity pylons as perches or roosts – in their breeding territories, during migration and in their wintering grounds. However, this habit poses a serious threat to their survival. Installing insulation on dangerous electricity pylons is an urgent measure for the conservation of the Egyptian vulture, and for the conservation of many other species of birds of prey too.

The fight against this threat on the Balkans and along the migration route of Egyptian vultures in its entirety has several important aspects. The most popular is the installation of insulation on potentially dangerous electricity pylons with the purpose of protecting the birds from electrocution upon perching or taking off from the pylon. So far, more than 65 000 dangerous pylons have been identified on the Balkans, in the Middle East and in Africa, and steps are taken both for a prioritized insulation of the most dangerous among them, as well as for a change in the planning policies so that newly installed pylons are of designs that are safe for the birds. 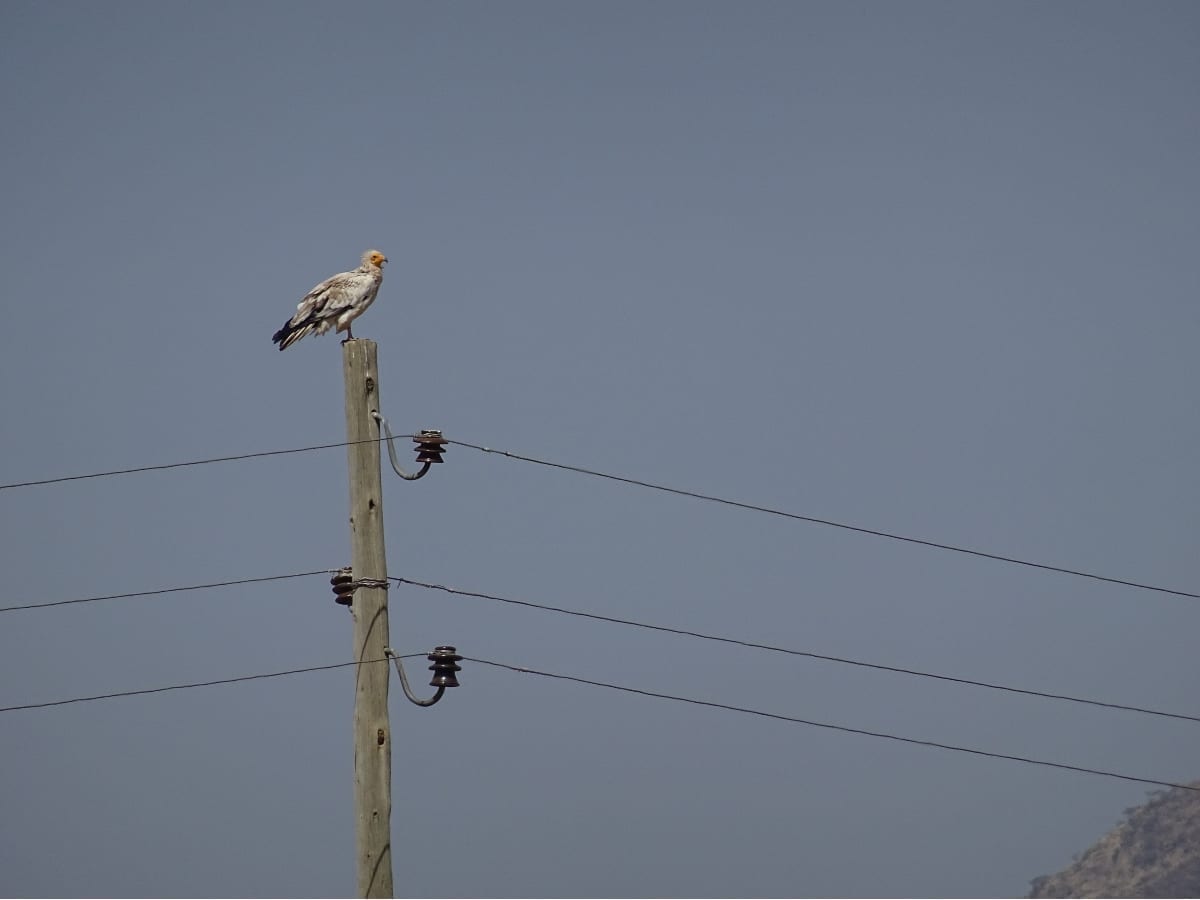 For 12 years more than 70 people from Bulgaria and abroad have taken part in the guarding of Egyptian vulture nests, including volunteers from Canada, Romania, Lithuania, Germany, England, Belgium, France and USA. The mission of the guards is to monitor the young in the beginning of August when they leave the nest. In this period young Egyptian vultures are still inexperienced and there is a high risk of accidents. Therefore our volunteers monitor the nests every day and they are ready to respond, should a young bird fail in its first attempts at flying. So far 5 young have been saved and more than 100 birds have successfully left their nest thanks to the indispensable help of our volunteers. 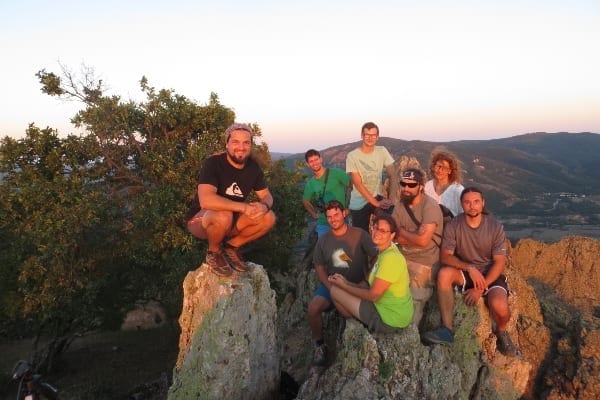 Since 2010 the BSPB has tagged 71 Egyptian vultures with satellite transmitters. The transmitters have helped us enormously for getting to know better certain aspects of the birds’ biology and ecology, as well as for revealing the dimensions of the threats that the birds face in their breeding territories on the Balkans, in their wintering grounds in Africa, and along their migration route. We have tagged young birds just before they leave their nest, and we have tagged adults too. The little GPS transmitter has a small solar panel with a battery and an antenna; it is fitted on the back of the bird with specially designed straps. Its weight doesn’t exceed 30 g and it doesn’t affect the flight ability of the bird, so it can carry it for its whole life.

You can see the routes of all our tagger Egyptian vultures here.

Besides transmitters, another opportunity to have an intimate peek into the mystical world of Egyptian vultures are photo traps and our camera that streams live from a wild Egyptian vulture nest in the region of the town of Provadiya. For more than 9 years in the period April–September we can watch the life of the vulture family in the nest. You can see the stream at: www.LifeNeophron.eu 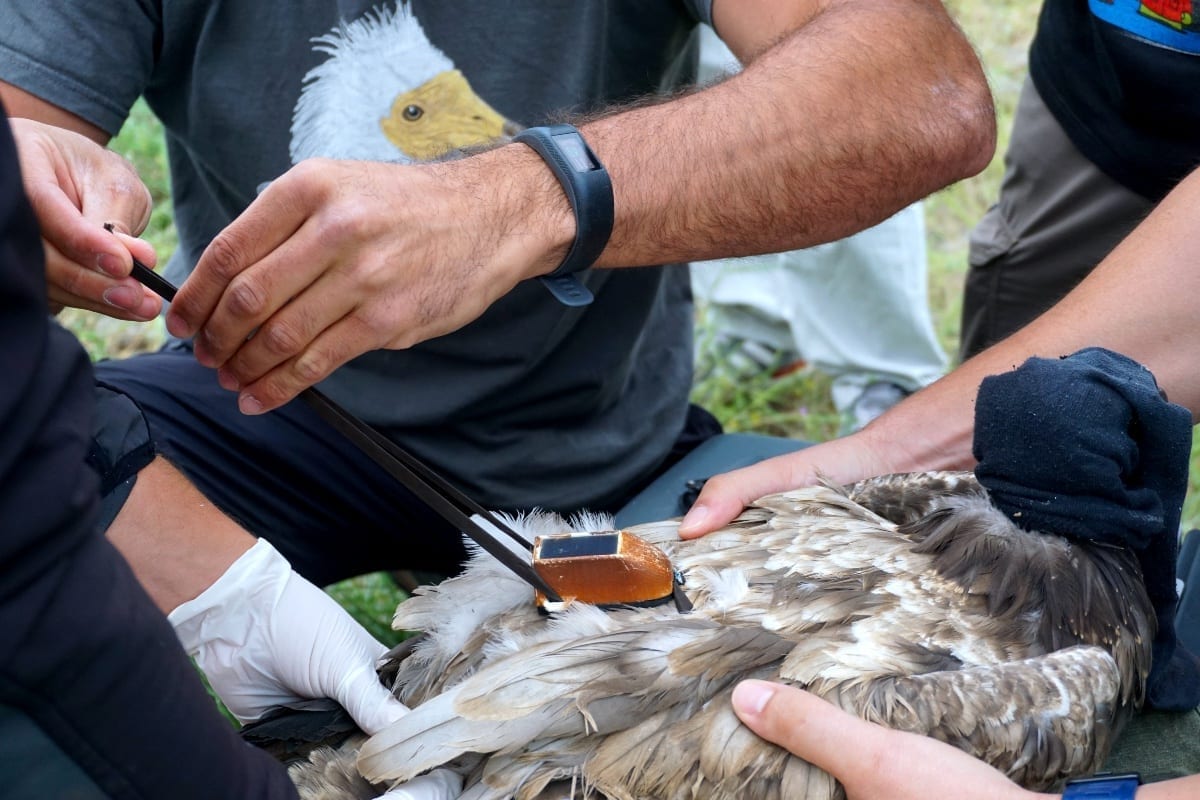 fas|fa-exclamation|
Wildlife trade is an illegal activity that inflicts irreparable damage upon the populations of many endangered species across the world. The Egyptian vulture also falls victim to this criminal activity. Poachers attack not only adult and young birds of the globally endangered species but their eggs too. In Bulgaria, the case of Mr Ross became known to the public when the British citizen was arrested for taking the eggs from an Egyptian vulture nest in the wild. Our team also assisted in the investigation that followed.
fas|fa-exclamation|

The motives for such crimes are collectors’ demands, taxidermy and export, as well as the use of parts of the vulture’s body in traditional medicine, and as charms against witches and evil spirits; this latter practice is spread in some countries in Africa and is one of the main causes for the decline in the population of the species there.

The education of children and young people on the Balkans, as well as along the migration route of the Egyptian vulture, is one of the priorities in our work. We believe that if we introduce the species, its ecological function and the ecosystem services that it participates in to the younger generation we will help forming the basis of the sustainable conservation of the Egyptian vulture in the future! Besides planning educational programmes for school students on all three continents, our team works devotedly for providing a comfortable learning environment for children in the African countries where this has not been fully achieved yet. By supplying electricity, drinkable water and internet access we give the teachers the opportunity to provide a modern, adequate education process, and we give the children a chance to broaden their horizons and to realize their potential.

Besides our work with children we take an active part in the building of expert capacity in other non-governmental organizations, national park teams and institutions. 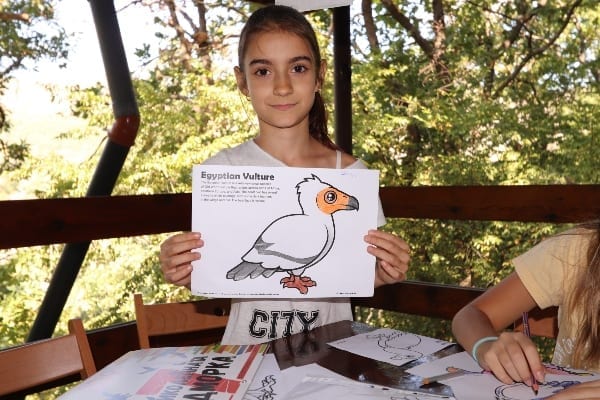 Parallel with the conservation and education activities that we realize, we work hard to improve the legislation in those aspects that could have a negative impact on the status of the Egyptian vulture. In that respect we monitor the legislation processes concerning the use of poisons and poisonous baits, the import, storage and regulation of plant protection products, the use of veterinary medical products and many more, in order to improve them and to suggest measures for reducing the negative impact of such products and processes on the Egyptian vulture on the Balkans, as well as along its migration route.