The black vulture is the largest bird of prey in Europe. The species is listed as ‘extinct’ in the Bulgarian Red List. The last nesting attempt in the country was recorded in 1993 in the Eastern Rhodope Mountains. The only black vulture colony on the Balkans, with about 30 pairs at the moment, is located on the Greek side of the Eastern Rhodope Mountains, in Dadia National Park. Wandering black vultures come to Bulgaria to search for food, to rest and roost. 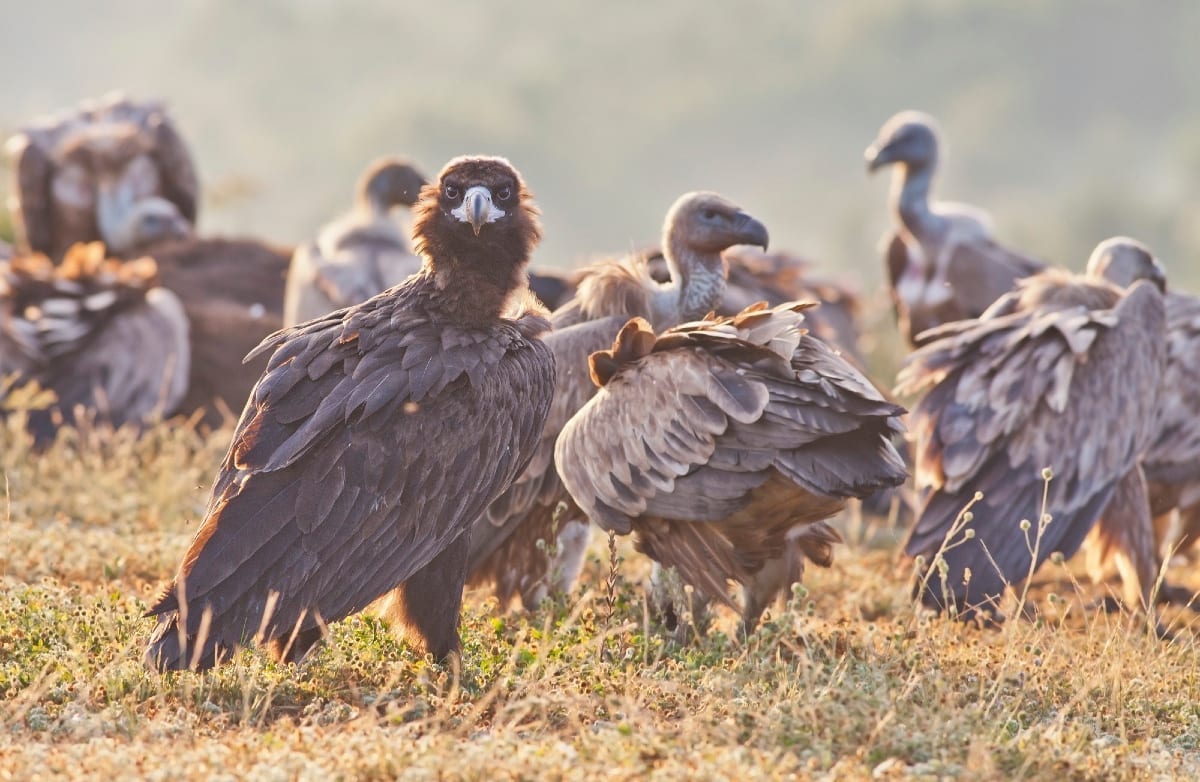 The vultures’ dark plumage makes them appear black from a distance. Their short tail is very characteristic. The head is light-coloured in adult birds, whereas in the young it is black. In flight black vultures are identified by their straight head-on silhouette during soaring. On the ground or in the trees they are identified by their huge dark body; the birds have a feathered ruff, and their wings cover the tail. The massive beak also stands out.

The breeding of black vultures in Bulgaria has not been researched enough. In the past, they used to nest across the country in high numbers. Today, they can often be spotted in the Eastern Rhodope Mountains where birds from the colony in Dadia National Park in Northern Greece come to feed. Black vultures nest and rest in old-growth broad-leaf forests (oak). The colony in Dadia is in an old-growth coniferous forest, mostly by black pine and Turkish pine.

Both partners participate in the construction of the nest but the male has the lead. In most cases the nest of the black vulture is located on the top of the crown of the chosen tree. 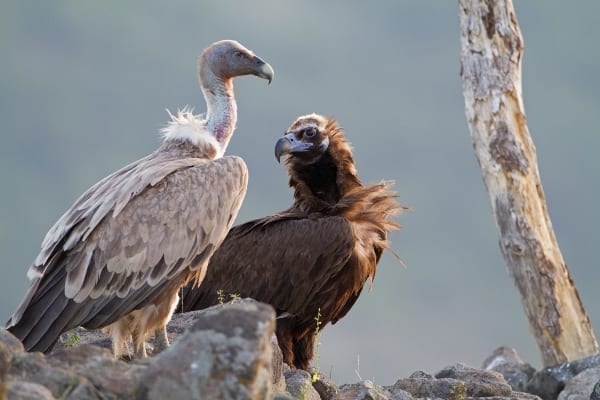 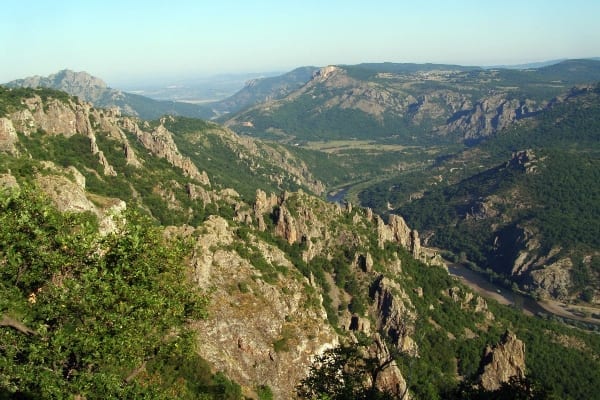 The birds choose a cliff or a tall tree from where they can observe the entire area. Black vultures are sensitive to humans and other sources of disturbance within a radius of 400 m around the nest. The birds stay close to their nest for the most part of the year, leaving it for longer only in October and November.

Depending on the weather conditions and the geographical position of the nest, females lay a single egg in January–March. The young hatch in March–April and stay in the nest for more than 3 months, leaving it in late July–August. The young remain with their parents living in a family group until their reach maturity – at about 6 years of age.

Black vultures feed mainly on the carcasses of domestic and wild mammals. Thanks to their powerful beaks they can easily open the carcass of a dead cow, for example. Still, they prefer to eat the more solid tissues – sinews, skin and cartilage. They search for food alone or in groups. Vultures can last for 2–3 weeks without eating. Black vultures search for food across diverse landscapes – forests, scrub habitats, open pastureland and bare mountain slopes. In Bulgaria, their feeding grounds include areas with grazing domestic herds, hunting estates for small and big game and the breeding territories of wolves. 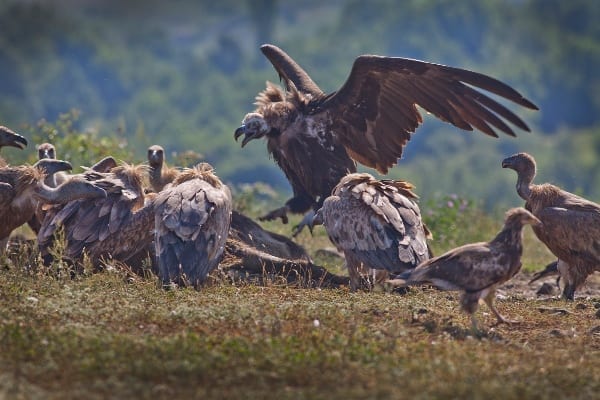 Black vultures are a resident species, although individual birds might wander. The feeding migration of birds from Dadia National Park in Greece to the Bulgarian side of the Eastern Rhodope Mountains is most intensive in March–September.

The role of vultures in the wild

Our living planet works properly only when all its components are in good order. If a carcass of a dead animal stays in the wild, it is extremely important that it is removed and transformed into nutrients that are included in the cycle of matter once again. There are many organisms that play that role in the wild – from bacteria, worms and insects to mammals.
Vultures are among the best cleaners among the birds. They clear off the carcasses in the wild perfectly, aided by the high acidity of their stomachs. Of course, there is more to this complex process. In fact, everything that passes through their stomachs undergoes a complete disinfection. Therefore they have earnestly earned their nickname – nature’s cleaners. 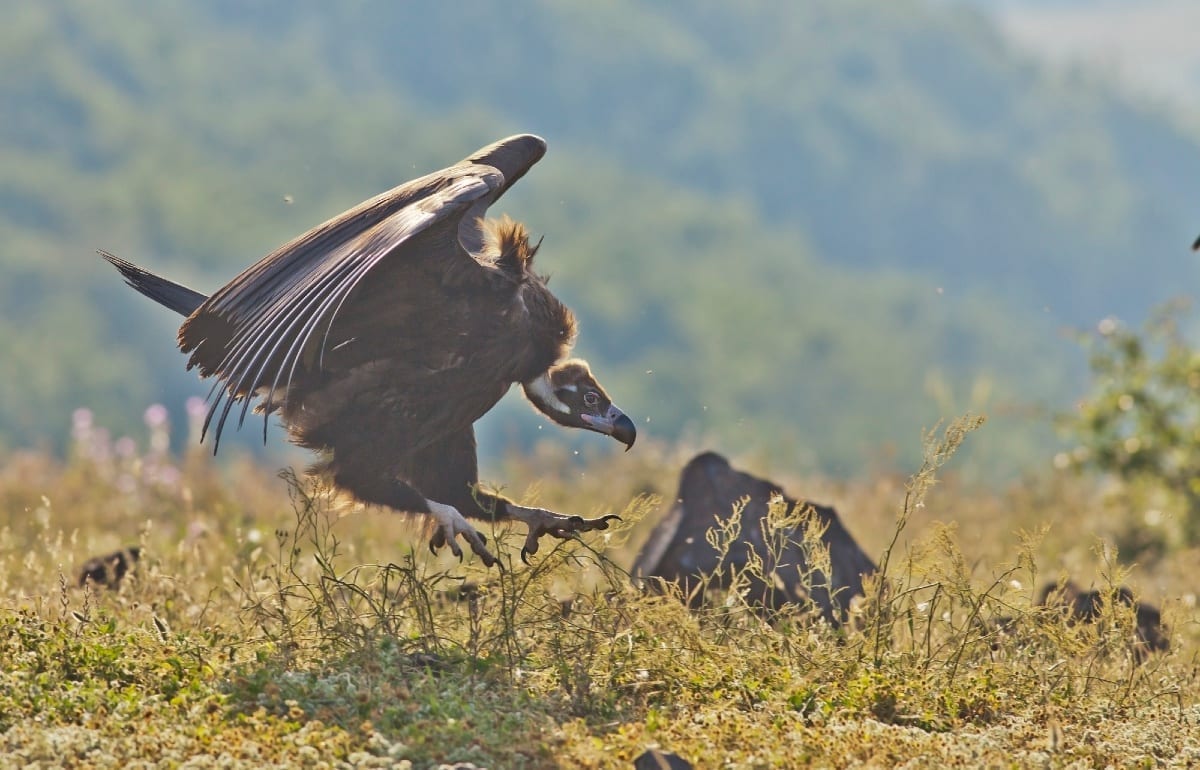 Supplementary feeding is among the chief conservation strategies for vultures in Europe since the 1970s. It is a necessary instrument in the early stages of supporting frail populations of vultures, especially in areas where their natural food sources have been seriously reduced.

In the 1980s the situation was similar in Bulgaria too: a gradual decline in livestock breeding began, along with immigration of people towards the bigger cities.

At the same time, the ban on leaving carcasses of domestic animals out in the open in Western Europe due to sanitary reasons in the beginning of the second millennium threatened the very survival of carrion-eating birds.Thus, with the introduction of stricter veterinary regulations and sanitary-hygienic norms, the first serious factor for the decline of the vultures became a fact – limited food sources. The general reduction in numbers of free grazing herds of domestic animals also had a serious impact on the vulture population. For vultures it meant simply less food.

Supplementary feeding reduces the risk of poisoning too, thus contributing to a higher breeding success and better chances of survival of the birds. The feeding methodology depends on the individual target species, and at present we develop the concept of smaller, less intensive feeding sites that can be used by local animal farmers too. Such sites exist already in the Rhodope Mountains in Greece and besides the benefits for local animal farmers they play an ecological role too. The gathering of many birds together is avoided, competition amongst vultures is alleviated and conditions are created for more effective conservation measures in the case of use of poisoned baits in some of the vulture-inhabited areas.

The feeding sites are built in compliance with European directives and with national veterinary legislation that reflects the European regulations with the following requirements:

enough space for landing and take-off;

accessibility for the delivery of the food;

a fence to prevent mammals from visiting the site and carrying away animal remains in the area; 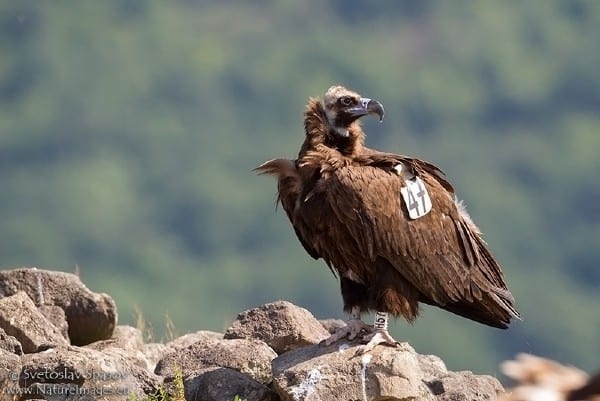 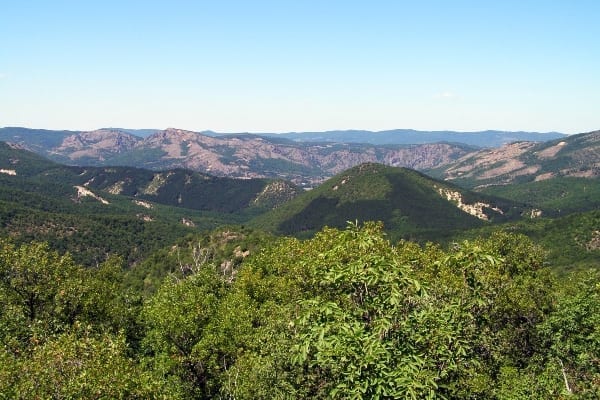 In order to reduce the risk of extinction for the only existing black vulture colony on the Balkans on the Greek side of the Eastern Rhodope Mountains, as well as to stimulate a natural expansion to suitable nesting sites in the area, we installed 15 man-made black vulture nests on the Bulgarian side of the Eastern Rhodope Mountains. The nests are positioned in old oak forests on steep northern slopes in accordance with the requirements of the species. The specific spots for the nests were chosen after a detailed analysis of the micro and macro preferences for the nesting and feeding habitats of the species. The nests are located along the main flight corridor between the breeding grounds in Greece and the main feeding grounds in Bulgaria, close to known roosts of the black vulture, in order to increase the chances for them to be occupied if the breeding population in Greece is in a good state.

The only team with a specialized dog trained to find poisoned dead animals and baits in Bulgaria is the BSPB’s own anti-poison team. The team started operating in 2016 chiefly in the area of the Eastern Rhodope Mountains and Sakar Mountain but it responds to situations across the country. The task of Bars and his handler Nikolay is to search for carcasses of poisoned animals and for poisoned baits and to alert the respective authorities. After finding a carcass the handler determines what steps to take, as the animal could have died from natural causes. In case it has been poisoned, it must be removed from the wild as soon as possible; samples are sent to a laboratory to establish the cause of death.

Even today, when the use of poison and poisoned baits is strictly prohibited, we still witness vultures losing their lives due to poisoning. This is one of the most dreadful measures against predators; in Bulgaria it is used mostly against wolves but vultures fall as its victims too.

One way to fight this wildlife crime is the preparation of a national plan against poisons. The plan is a science-based, legally relevant, functionally and financially stable and sustainable system for management of the work, control, interactions and actions of the chief state institutions, NGOs and other interested parties for the problem of the negative impacts of poisons on biodiversity.

Dangerous electricity pylons are just one of many threats that vultures and other rare birds face on a daily basis. Upon perching or take-off from risky electricity pylons the birds can touch the lines and be electrocuted. In order to reduce the risk we established a partnership with electricity providers in the country to insulate potentially dangerous pylons. The insulation is made of special plastic and is placed on the lines on both sides of the pylon, thus eliminating the chance that the bird would touch them and reducing the risk of electrocution and power-cuts. The length of the insulation is adapted to the size of large birds of prey such as the vultures.

In certain conditions, such as low visibility due to fog, or in strong wind the vultures can collide with lines on ridges or in other places where they fly low or start gathering height. Unfortunately, vultures and other birds are not always able to see the lines on their course and collide with them. To avoid that, additional devices are used – special diverters. Diverters are reflective plastic elements that are installed along the power line. As they rotate, they reflect the sunlight, thus signaling the birds of the obstacle in front of them.

From the autumn of 2016 to the end of 2020 our team tagged successfully 27 black vultures of different ages with GPS transmitters. The tagging was carried out by our colleagues from Dadia National Park who caught the birds with a specially designed trap. Satellite tagging provides an opportunity for continuous monitoring and control of the situation for each tagged individual. Besides information about the birds’ biology and ecology – size of individual area, spatial preferences, sites for nesting, feeding and resting, diet, movements and wandering of the birds, the devices allow us to be responsive to the key threats for the species, such as the use of poisons and poisoned baits, power-line and wind-turbine collisions, etc. The transmitters allowed us to track the amazing journeys of some of the tagged young birds to neighbouring countries like Romania, Serbia, Albania, North Macedonia and Southern Greece.