The saker falcon is the largest species of falcon in Bulgaria. Sakers are of the same size as common buzzards but their silhouette is more graceful, with sharper, narrower wings in flight. The young have darker plumage than the adults. You can find a detailed morphological description of the saker falcon in our online identification guide.

In Bulgaria, the saker falcon can be found in the mountains Stara Planina, Sredna Gora and Rhodope, as well as in certain areas in the Danube Plain, Dobrudzha and the Thracian Valley. During migration it can be seen most often along the Bulgarian Black Sea coast. The species is resident and migrant for the country, with wintering individuals from the more northern European countries. The autumn migration is most intensive in September. The saker falcon lives in open spaces in the vicinity of cliff formations and forests, pastures and agricultural lands.

The saker falcon occupies old nests of other tree-nesting birds

Saker falcons do not build their own nest but individual birds have been observed bringing small twigs, grass and even pieces of nylon rope to their nest. However, such behaviour should be regarded as a courting ritual, rather than as nest construction. Saker falcons nest directly on the ground in cliff niches or on ledges (sometimes with no cover) or in the old nests of other species of birds. On cliffs they occupy mainly raven, long-legged buzzard and golden eagle nests. The female lays 3–6 eggs, and the pair raises one brood per year in the period March–July.

New hope for the species in Bulgaria

Since 2006 the saker falcon is considered extinct from Bulgaria as a breeding species. In 2018 a team of the BSPB discovered the first active saker falcon nest in the country after ten years of absence. One of the partners in the pair was a falcon raised in captivity by our colleagues from Green Balkans. The pair successfully raised two chicks; both young left the nest without incidents and we hope that they will settle at new locations in Bulgaria.

A diverse diet of mammals and birds

Saker falcons feed mainly on sousliks and other small rodents, and more rarely – on birds, mostly species that live close to the ground in open spaces. They catch their prey mostly on the ground although they have been known to hunt in the air too. 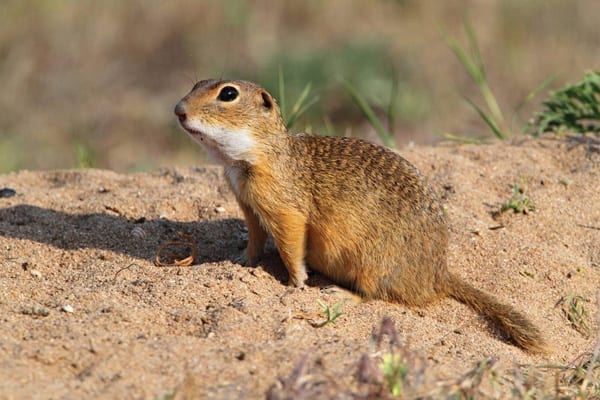 In the end of the 19th century saker falcons were relatively numerous and wide-spread in Bulgaria. After the 1950s their numbers declined rapidly and in the 1980s there were less than 15 pairs in the entire country. There are many reasons for this decline, but to the greatest extent it was the result of:

fas|fa-exclamation|
purposeful mass extermination of birds of prey for decades;
fas|fa-exclamation|
habitat destruction and a sudden decline of food resources due to the intensification of livestock breeding, the consolidation of agricultural lands, the mass use of pesticides, etc.

After 1985 the decline deteriorated due to poaching aimed at young falcons and eggs in the nests of the few remaining breeding pairs in Bulgaria.

A case study for the species, carried out by the BSPB in 2006–2014 revealed that individual occupied territories did exist; it was assumed that there were 1 or 2 breeding pairs but no direct proof was found for any nest. 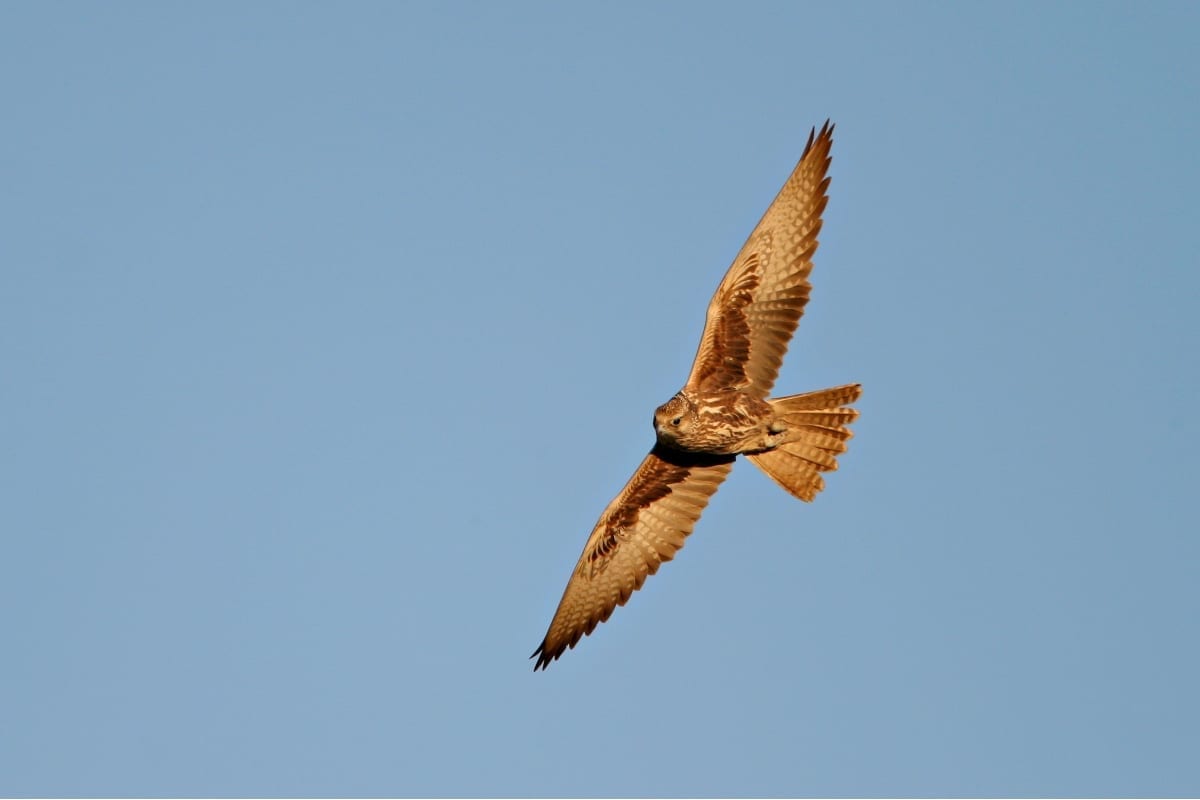 The threats for the saker falcon

The concentration of a number of significant negative factors for the saker falcon in a relatively short period (the last two decades of the 20th century) practically made it impossible for the species to adapt to the increasing threats and the changes in its habitat. The state of the species is directly influenced by the decline in its numbers, the lower number of successful nestings, and the violation of traditional nesting sites of the species by poachers and falconers. At the same time, key factors for the species survival have deteriorated drastically too – its habitats and its food sources that are no longer regarded as valuable by humans due to a variety of reasons.

At present, the saker falcon is endangered by extinction globally.

The BSPB is among the chief participants in the preparation of the National Action Plan for the Saker Falcon’s Conservation in Bulgaria, an official document, and a statement by the government for its involvement in the conservation of the species. With this act Bulgaria enlisted among the most advanced countries in Europe and met the requirements of international conventions for nature conservation.

Former breeding grounds and habitats of the saker falcon during its wandering and migration, proposed by the BSPB, were integrated into the Natura 2000 network as areas of highest importance for Bulgarian nature that are protected by European law.

A variety of actions, including the agri-environmental measure introduced for the imperial eagle, aim at improving the feeding grounds of the saker falcon too, as the two species share a similar biology and often nest close to each other. The BSPB realized a complex of measures for the protection of pastures and meadows, as well as for the restoration of the souslik colonies that play a critical role for the saker falcon too.

The BSPB realizes a number of actions for the protection and conservation of the souslik colonies that are the main source of food for the saker falcon, the imperial eagle and for other species of birds of prey during their breeding periods. Besides the protection of existing colonies, a series of attempts for the destruction of souslik colonies that are key to the saker falcon through ‘investment proposals’ were prevented. In recent years the BSPB applies the most modern methodologies for the restoration of heavily damaged souslik colonies via importing animals from other colonies and stimulating their survival.

Some of the BSPB’s first actions were directed against nest robbery and other crimes against the saker falcon. After decades of strenuous work for the conservation of the species and of other species of birds of prey we succeeded to involve the Bulgarian Ministry of Interior, the State Prosecutor and the Bulgarian Customs, as crimes against wild birds and other wildlife are usually associated with organized crime networks. For example, the poisoning of birds of prey by pigeon fanciers who organize competitions and take illegal bets has a direct impact on the birds of prey, but it affects people’s health and the state’s wealth too, thus falling into the competence of units fighting organized crime (the poisons can harm people in nature directly, and illegal betting is… illegal). The illegal traffic of wildlife across the border uses similar channels as those for drug trafficking. Therefore, we consider the involvement of state institutions in the problem a great success. 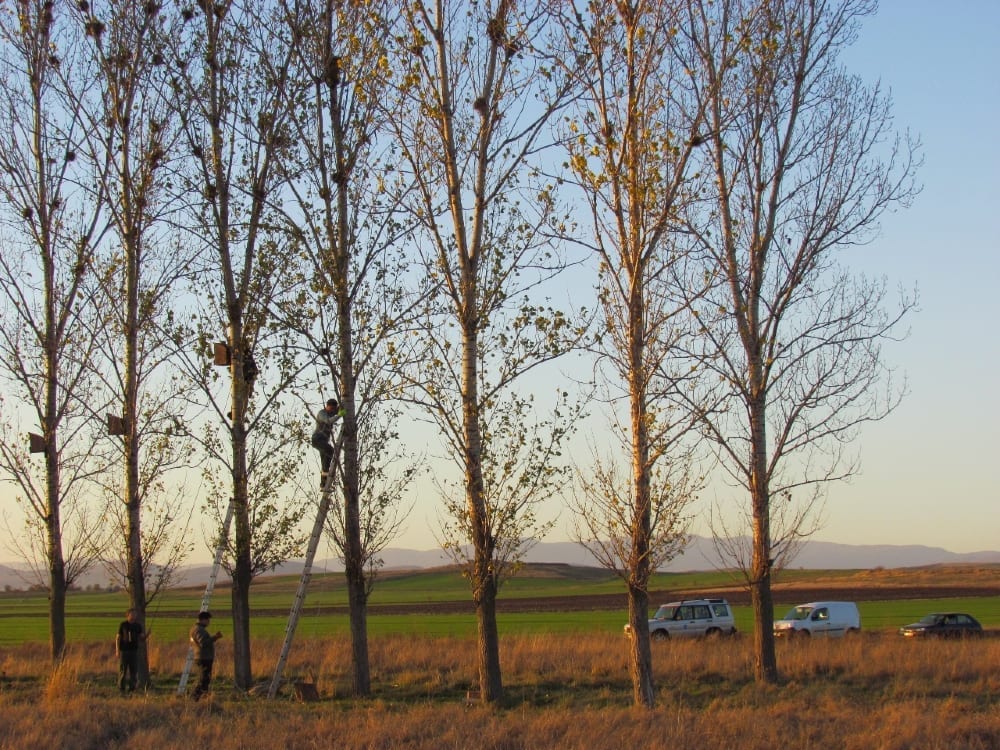 Improving the nesting conditions for the saker falcon

Saker falcons are birds of the open territories but they don’t have suitable nesting grounds in the plains in Bulgaria. Nevertheless, many young sakers coming from Hungary, Slovakia and Ukraine visit the Bulgarian plains and spend time there. In order to stimulate them to breed, the BSPB mounted more than 350 man-made nest boxes of several types. Some are installed on trees, others – on pylons of the high-voltage power grid where electricity provides protection of the nests. At present, almost all nest boxes are occupied by other species of birds of prey (kestrels, hobbies, long-legged and common buzzards). But if saker falcons choose to nest there, they won’t have a problem dealing with the competition…

In recent years more than 10 saker falcons, tagged with satellite transmitters, died of electrocution upon perching on pylons of the 20 kW grid. Therefore, one of the key initiatives for neutralizing the threats for the species that the BSPB launched was the insulation of dangerous power lines. The insulation devices are made of a special material and are quite costly, so we provided funding by the European Union and in cooperation with electricity providers in Bulgaria we organized the insulation of the most dangerous sections. Furthermore, electricity providers proceeded with the insulation of new sections at their own expense, as in this way they save resources from repair work after incidents on the power-grid. This benefits not only the saker falcon but many other species of birds of prey, and white storks too. Every year hundreds of birds are saved from electrocution; many of them – of endangered and rare species.

International cooperation for the conservation of the saker falcon

Thanks to our cooperation with organizations from the other countries from the saker falcon area of distribution we were able to monitor directly the behaviour and movements of satellite tagged birds on the territory of Bulgaria, and – unfortunately, – on several occasions we were able to find dead birds and bring the transmitters back to the issuing organization.

Research and monitoring of the species

The BSPB carries out continuous data collection for the saker falcon in Bulgaria in order to monitor its state and population trends. We collect information for the threats for the species – both general as well as particular threats in every individual nesting territory of the saker falcon – former or potential. We maintain a saker falcon data base for Bulgaria.